The Flaws of Fluoride

In light of the recent stance by the U.S. Department of Health and Human Services (HHS) along with the Center for Disease Control (CDC), that our youth are over fluoridated, I think it is timely to review this topic.

The government first began encouraging municipal water systems to add fluoride in the early 1950s. Since then, fluoride has been put in toothpaste and mouthwash. It is also in a lot of tap waters, bottled waters, and most drinks made from them, including soda and reconstituted juices. Additionally, some children even take fluoride supplements.

Since 1962, the fluoridated water standard  has been in a range of 0.7 parts per million for warmer climates where people drink more water, to 1.2 parts per million in cooler regions. The new proposal from HHS would set the recommended level at just 0.7. Meanwhile, the Environmental Protection Agency (EPA) said it is reviewing whether to lower the maximum allowable level of fluoride in drinking water from the current 4 parts per million.

As a result of this fluoride overdosing, there has been an increase in discoloration of our children’s teeth. Sure the enamel is stronger and less likely to have decay, but who wants to smile with splotchy pearly browns and yellows? 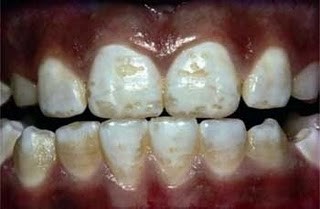 Dentally, this condition of fluorosis is not easily corrected. No amount of whitening (possibly more fluoride) will make it disappear.  One is usually left with an alternative of a dental cosmetic makeover – a somewhat costly and time-consuming endeavor, or the cheaper alternative – don’t smile with teeth showing.

This is not what I would call conservative healthy dentistry. Actually it is iatrogenic-   preventing one dental disease (decay) but creating an entirely new one (yellow, brown splotchy teeth) as a side effect.  Sort of like when the surgeon says that the operation was a success, but unfortunately we accidentally punctured your kidney. There is no justification for this. None.

So here are the facts:

2) 1% – 5% of the population is allergic to or intolerant of fluoride.

3) The CDC reports that over 41% of adolescents are fluoride-overdosed which shows up as dental fluorosis – white spotted, yellow, brown and/or spotted teeth.

6) Fluoride is not an essential nutrient. http://www.fluoridealert.org/health/infant/essential.html

8.  In 2006, a National Research Council panel of experts released a report which shows that fluoride, even at low doses added to water supplies, can harm kidney patients, the thyroid gland, high water drinkers and babies.  They also found studies linking fluoride to lowered IQ and cancer plausible.  http://www.nap.edu/catalog.php?record_id=11571

9) Fluoride is in virtually all foods and beverages from fluoride-containing pesticide residues and fluoridated water used in processing. USDA chart: http://www.ars.usda.gov/Services/docs.htm?docid=6312

10) Fluoride safety has never been approved by the FDA. http://fluoridedangers.blogspot.com/2005/12/fluoride-never-fda-approved-for.html

11) The water supply should not be used as a drug delivery system to individuals without regard to age, weight, health, need, and informed consent. Fluoride is the only water additive intended to treat people and not the water.

Can we point fingers and blame the government or the ADA or the dentist? Maybe. But that still won’t solve the problem anytime soon. We need to be consciously aware of what we are ingesting and take our own action to get this poison out of our drinking water.

Aside from dental fluorosis, long term ingesting of fluoride can cause skeletal fluorosis, a fluoride-induced bone and joint disease that mimics rheumatoid arthritis, osteoarthritis and osteoporosis. Does this make you think twice about those body aches and pains that you thought were due to aging? I think so.

Now would be a good time to consider getting a water filter for fluoride (Alumina or Reverse Osmosis) or access quality spring water.  Beginning a detox for the fluoride that has been accumulating in your body would also be a step in the right direction.

Are My Mercury Fillings Bad for Me

Reply Dr. Brand
3:15 PM on October 21, 2011
Thanks for the support. It's really important for everyone to be informed and make smart decisions about their health. Including me!